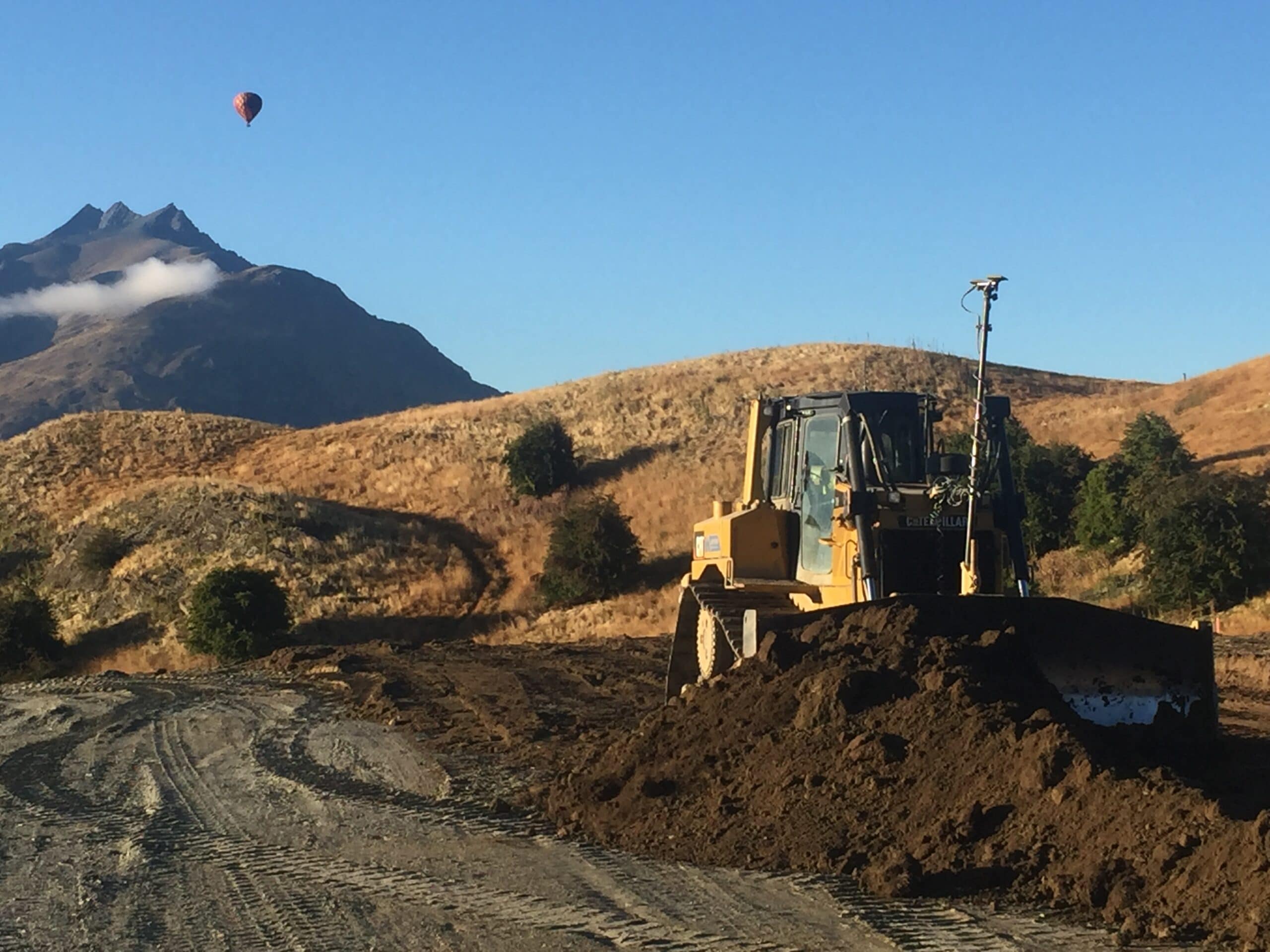 To comply with consent conditions and regulations an Environmental Control Plan was prepared, implemented, and the mitigation measures maintained. As conditions changed it was regularly updated. This consisted of managing bare areas to minimise runoff, armouring and protecting flow paths using rock and geotextiles, and sediment settlement ponds. A 25,000l all-terrain water tanker was used on site for dust control.

The Engineer divided the site into 12 segments with cut and fill volumes, and completion milestones listed for each. The volumes involved in each segment didn’t allow for a balance of earthworks so they couldn’t be worked separately.  The segments were ordered in our construction programme based on the completion milestone date for each. It was then possible by considering the cut and fill volumes for each segment to plan a sequence around handling the material as little as possible and meeting each milestone. This meant that work on some segments with milestone dates towards the end of the contract period were in fact started well in advance of when they needed to generate borrow to fill material for other segments that had a deficit of cut to fill.

The materials across the site varied from silts and sandy/silty gravels up to 3.4m deep to highly weathered schist encountered at ground level and hard schist 600mm down. The highly weathered schist was handled as an ordinary cut. The remainder of the rock was classified as Type R2 and some 34,000m3 was either ripped using a 45-tonne excavator or drilled and blasted. This material was conditioned using a Padfoot construction roller to break any remaining larger rocks down to a material similar to AP65 which was used in certified fill areas.

All fill, both certified and non-certified required testing to ensure the contract specification was met. An inspection and testing plan, (ITP), was drawn up and approved by the Engineer. In excess of 1,000 individual NDM tests were conducted on site, each logged in the ITP to record results, lift number and location. It was a requirement of the contract that this ITP was signed off by a Chartered Professional Engineer retained by Grant Hood Contracting. This provided independent verification that the engineered fill complied with not only the contract specification but the relevant New Zealand Standard for subdivision developments.

GPS Machine control played a major role in the efficiency of plant on site. Design models were frequently updated by the engineer to account for balancing of cut and fill volumes and tweaks in designs from the architect. These revised designs were able to be remotely uploaded from the office to the GPS rover and GPS machine-controlled plant on site. There was also the advantage of feeding data back from plant on site to the office to assist with verification of earthworks volumes for input to monthly claims.

Partway through the contract, a geotechnical report identified some sections which would require ground stabilization. This was to be in the form of a Geogrid raft foundation. On each of the identified sections, existing material was excavated and incorporated as fill in other non-certified fill areas of the works. Some 20,000m2 of geogrid was placed and incorporated with certified structural fill to construct the specified raft foundations.

Because the growing-in period for a golf course extends out over 2 years the earthworks were planned around completing these areas early in the piece to allow the golf course contractors as much time as possible to complete their works. The 30,000m3 irrigation lake and 8m deep DN1800 wetwell also had to be completed by early November 2018 to store water drawn from the Arrowtown Irrigation pipeline during the irrigation season when surplus water is available. This allows for irrigation of the fairways and greens when low flows in the Arrow River restrict the irrigation take. The lake was lined using a Geosynthetic Clay Liner (GCL). Cover material for the GCL was won from suitable material on site reducing the need to import any material. Winter weather added to the difficulty of the task as did the discovery of both R1 & R2 rock in the lake excavation. Some of this rock required blasting while some of the softer rock was ripped with the 45ton excavator. Despite the challenges, both targets were achieved, through optimization of our time and efficient management of the cut to fill operation.

Culverts and Stormwater drainage systems were also installed. Some 180m of DN600 RCRRJ, 210m of DN450 RCRRJ and associated DN1050 manholes, scruffy dome entries and headwalls were installed. Smaller diameter drainage lines were installed on the golf-cart paths. This consisted of 250m of DN300 PVC and 190m of DN225 PVC. These areas were extremely steep with some pipe grades in excess of 40%. Due to the steep and restricted access to this portion of works some innovative solutions were developed. Prefabricated PE manholes were installed in place of concrete manholes. A lightweight formwork was used for the shuttering of cut-off walls along the steep sections of pipeline. These innovative solutions sped up construction and reduced the need for heavy lifting while working on steep narrow access tracks.

The entire project was completed ahead of time and on budget resulting in Grant Hood Contracting Limited maintaining a presence on site for another year, assisting with other aspects of the greater Millbrook development.