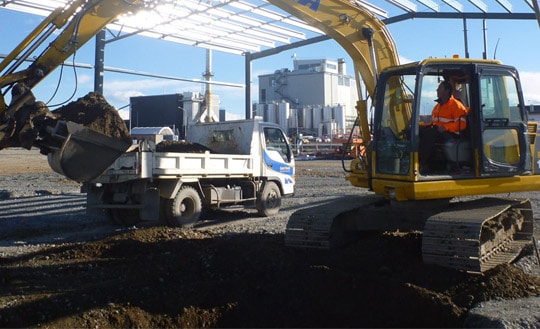 In late 2013 we were invited by Calder Stewart Construction to take over the contract for the detailed excavation for the Drystore 3 project at Synlait.

This involved remediation works to the engineered fill for the building platform where it was sub-standard, and then the construction of the blinding layer to tight tolerances. The platform measured 165m long by 145m wide and needed to be finished to within +/- 5mm. Levels outside these limits would have resulted in the floor slab buckling during the post-tensioning operation. The works also had to fit the construction programme, with each of the five bays having only a 3-4 day envelope from the pour of one to the placing of tensioning rods for the next. We fitted a laser guidance system to a grader and achieved +/- 3mm, a result that meant Calder Stewart needed 55 cubic metres less concrete for the floor slab than they had allowed. On completion of the Drystore works we then constructed the building platforms for the Environmental Load-out area, and for the external slab where containers are stored and trucks maneuver to enter the Load-out area.

Calder Stewart followed this up with an invitation to undertake the siteworks and detailed excavation for the Transport Yard Office and Workshop. This has involved excavating unsuitable foundation material from the footprint, building the platform to level with engineered fill, and then excavating the footings, mechanics pit, strip drains etc. On completion of the building we have formed the apron areas, backfilled against the foundations, and made good the site.
Since then we have joined with Calder Stewart again to undertake the same suite of works for the Administration Building and the Link with the existing office block. Additional works on this site have included assisting their drainlayer to re-position the wastewater and stormwater drains from under the footprint, and the demolition of the concrete wall panels and footings along the margin with Drystore 2.